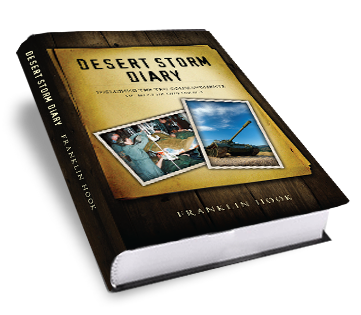 Desert Storm Diary is a window looking in on a point-of-view belonging to the commander of North Dakota's 311th Evacuation Hospital. He tells a story about a war that most Americans living today will remember well.

Praise from the Editor

"Overall, Colonel Hook has done a good job moving the narrative forward in a clear, chronological fashion. He establishes an accessible yet authoritative tone early on, particularly in the introduction, which ends with an appropriate sense of reverence for the sacrifices made by military personnel. He also does a great job narratively establishing the impending danger of war particularly in the prologue, which has a frightening sense of anticipation. The interviews provide a great conversational framework for conveying information and providing added depth to the narrative, particularly conversation with Colonel Michael A. Tichenor about B-52s. The epigraphs are very effective, because they come from a variety of sources, from Winston Churchill to the Bible."

"From the perspective of historical accuracy, the goal of documenting the major battles and negotiations of the first Gulf War are fully realized. Colonel Hook has done a wonderful job evocatively conveying the events and concerns of the first Gulf War by writing a detailed and well-informed account of his experiences. Perhaps the strongest point of the manuscript is the attention to detail."

"The taut simplicity of Desert Storm Diary’s prose style is very effective, and from the beginning it confidently establishes an effectively straightforward tone."

Words from the Author

“Some twenty plus years have now gone by and a number of good people from the 311th have left this life. As we age there will be more and more. My own life expectancy at this point is well under twenty more years. I wish we could pass on our experience to the next generation by reflection which Confucius says is the easiest.”